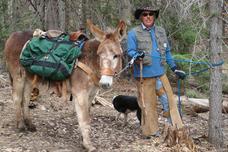 History of the Back Country Horsemen of New Mexico

​     In the fall of 1990, several horsemen (all of whom would later become members of the BCH of NM) planned to camp at the Holy Ghost Campground, a popular entry into the Pecos Wilderness of northern New Mexico. Fully loaded with horses, mules, the usual gear and enough food for a month, we arrived just as US Forest Service (USFS) workmen began pounding a sign at the entrance of the small parking lot. The sign declared "NO LIVESTOCK ALLOWED. $100 fine for violation." The workers knew enough about this new rule to tell us that this campground was off-limits to livestock because it was now a designated handicap use area; we were allowed to ride across the newly paved parking lot, but could not camp or hold our animals in the area. We packed up and moved to Jack's Creek horse camp at a higher elevation. We were probably the last horsemen to use Jack's Creek--the following week it too was closed. The area is usually closed after the hunting season since it is an elk wintering ground. When local newspapers informed us about a possible permanent closure of the Jack's Creek trail head by the Environmental Protection Administration (EPA) due to mine tailing contamination, we were alarmed and unable to get good information from the USFS at Pecos.

Something had to be done! "Somebody" had to do something. Then, I remembered an article I read about the Back Country Horsemen of America in the magazine "Equus" . . . great information about a service organization that did good things on horseback and worked with the Forest Service and Bureau of Land Management. Maybe they had a chapter here? Maybe they could help? So I wrote Lloyd Fagerland a letter and here's what happened . . . .​

Formation of the Back Country Horsemen of America

The Back Country Horsemen (BCH) first formed in Montana's Flathead Valley in January of 1973. Growth of the BCH

In 1981, a California organization known as the High Sierra Stock Users was formed and after several years of of discussion the four groups decided to merge. They would collectively call themselves the Back Country Horsemen of America.

A constitution was drafted in 1985 and accepted in 1986. A board of directors elected from each of the four units became the governing body of the new organization, thus uniting the Montana, Idaho, California, and Washington Back Country Horsemen.

Since that time, steady growth has occurred with the four founding state organizations. In addition, new state chapters have formed in Arizona, Colorado, Nevada, New Mexico, North Carolina, Oregon, Utah, Wyoming and nine other states, including Alaska, Florida, Arkansas, and Michigan. For more information on the national organization, visit www.backcountryhorse.com or the Facebook page at Back Country Horsemen of America. ​